For over 20 years, Sport Fishing on the Fly has been casting lines and catching beautiful fish across North America. The show is hosted by Don Freschi, and with over 35 years of experience, Don's knowledge of fly fishing and fly tying is unparalleled. Shot entirely in high-definition, and airing across North America on the World Fishing Network (WFN), and CHEK TV, each episode takes you to a beautiful, and often remote location, to fish for the various species local to that area.

Trail, British Columbia is the home base of operations, and many episodes are filmed in and around the West and East Kootenays, and Kamloops region. Rivers, lakes, and the open ocean, Don fishes them all, always with the intent to entertain and educate the viewer.

One of the most popular aspects of Sport Fishing on the Fly is the "On the Bench" segment that appears in nearly every episode. During the segment, Don selects a fly that was effective for that particular show, and then walks the viewer through the tying process, complete with list of ingredients and close-ups of the entire tie.

Originally hosted by Don Freschi and Grant Fines, Grant was instrumental in the creation of the show, and was a co-host for 15 seasons. He hosted a segment called "On the Technology", which was focused on discussing fly fishing products and equipment, often with the inventors themselves.

In 2007, Grant decided to peruse other opportunities in the United States, and the show faced a decision - end, or continue on with Don assuming sole hosting responsibilities. The decision to push forward was made, and it was done so in beautiful high-definition, bringing a new level of clarity and detail to each adventure. It was at this time that cameraman Les Stanchuk reassumed his role behind the lens, along with son Kale Stanchuk managing post production. The two
together handled production of the show through to Series 22.

Luckily, over the years, Don and Grant had been joined by many experienced, knowledgeable guests, including Brian Chan, Dale Freschi, and Dwyane D'Andrea. With their help, the show is now perfectly situated to move forward and continue to educate and entertain viewers. 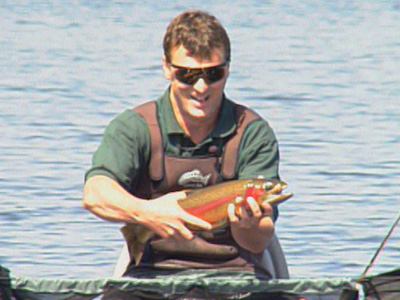 With no plans to quit anytime soon, Sport Fishing on the Fly is perfectly positioned to continue far into the future, delivering premium fly fishing entertainment and education. Our goal is to push the constantly evolving video technology to the limits, and provide the highest quality experiences across the airwaves, and the internet. With a strong new production team as of Series 23,
Sport Fishing on the Fly is ready to take the show to the next level,
and continue offering fans the quality fishing they've come to expect.

ON THE FLY ADVENTURES

WE WILL BOOK YOUR NEXT GREAT BC FISHING ADVENTURE. YOU JUST CHOOSE A PACKAGE AND WE HANDLE THE REST

Watch all of our latest episodes from any device!